Adulteration and passion all in a pinch of saffron’s history

In antiquity Crocus was said to be the name of a beautiful youth loved by the god Hermes, who accidentally killed him – and where the boy’s blood ran onto the earth, the first crocus flower sprang up. 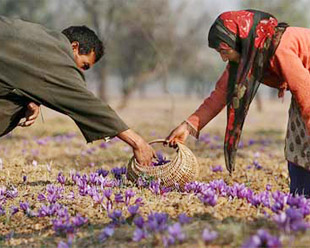 This is but one of the passionate and bloody stories in the fascinating history of the kitchen’s most expensive spice: saffron. These scarlet threads were a prominent spice in ancient civilizations with the oldest known reference to it in a Chinese medical book from 2600BC. It claimed that saffron gives strength and stimulation when making love.

Today the love affair with saffron is mainly in the kitchen where it is appreciated for its floral aromas and golden hue in classic dishes like Iranian polo, risotto a la Milanese, Spanish paella and bouillabaisse.

Saffron is the dried stigmas of the saffron crocus, a genus from the iris family. The costly spice originated in the Middle East and is today cultivated mainly in countries around the Mediterranean basin, but more recently production started in the new world including a very small operation in South Africa’s Namaqualand, near Vredendal.

The high price (About R70 per 1g depending on the quality) is due to the fact that an estimated 80 000 flowers are needed to make a mere 450g of saffron. The plants flower only three weeks a year and each has only three stigmas that have to be skillfully removed by hand.

The sky-high price of saffron naturally gave rise to counterfeit saffron. Apparently the Roman author Pliny considered nearly all saffron falsified. In medieval market towns in Italy and southern Germany the legal punishment for falsifying saffron was to be burned or buried alive!

Today saffron grading standards are set by the International Organisation for Standardisation (ISO) who consider colour, taste and fragrance of the saffron before it is categorised in one of four groups – IV being the poorest and I the finest quality. Few spice suppliers are however familiar with the ISO grading of their product and finding quality can be challenging. “There is no getting around the fact that buying saffron is a lot like buying illicit drugs. The concerns for purity and potency are the same, as are where it is grown and how it is processed,” writes Patt Willard in Secrets of Saffron.

With Spain, Iran and India as major producers it helps to know how they label their best. The best saffron is deep red, called coupe for Spanish and Kashmiri and sargol for Iranian. Some thicker, yellow threads from the style of the flower are included in the next grade: Mancha if Spanish or Kashmiri and poshal or kayam if Iranian.

Powdered saffron is even easier to adulterate, so rather buy whole and steep the stigmas in liquid before adding it to the dish. Adding it early in the cooking process will yield a stronger colour, adding it later a stronger aroma and flavour. Saffron might be expensive, but a little goes a long way and overdoing it could have you falling out of love with saffron as too much of this good thing tastes medicinal and bitter.