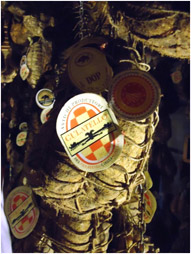 “It isn’t just meat, its myth” is Massimo Bottura, Italian three star Michelin chef’s description of his country’s best kept secret. Culatello is not a name often heard outside Italy but it seems to be one of those rare topics Italians agree on: it is their best ham.

Although the increased interest in culatello is fairly recent the king of Italian hams has been produced for centuries with a first official reference found in documents of the Parma municipality in 1735. Since 2009 a consortium has been in place to protect and promote the quality of the ham that also holds an EU Protected Designation of Origin (PDO) status.

Culatello di Zibello is strictly produced from pigs that have been born and raised in the Emilia-Romagna and Lombardy regions. Furthermore, the whole leg is not used but only the heart, the muscular inner part of the pigs’ thigh. The meat is deboned, messaged with pepper, garlic and wine, then rubbed with salt and placed in a pig’s bladder before it is wrapped into its characteristic pear shape with twine. 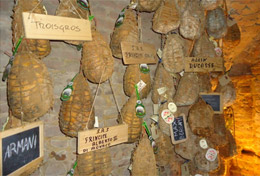 Much of this ham’s delicate sweetness is determined by the minimum 12 month aging process that depends on a very specific climate – long cold foggy winters and torrid sunny summers. The temperature in culatello cellars are not artificially regulated, instead producers rely on traditional techniques like growing ivy to achieve the perfect temperatures and humidity.

Massimo Spigaroli, Michelin start chef and one of Italy’s most famous culatello producers explains that unlike other hams culatello requires constant minding with the producer knowing exactly when to open cellar windows to let in the misty breeze from the Po to aid the noble moulds or when to keep away heat and humidity.

As this ham requires such a specific terroir and micro climate the production area for culatello di Zibello PDO is very small and can only take place in the foggy flatlands surrounding the Po River including the communes off Busseto, Polesine Parmense, Zibello, Soragna, Roccabianca, San Secondo, Sissa and Colorno. Producers believe the closer to the Po River the better the ham. 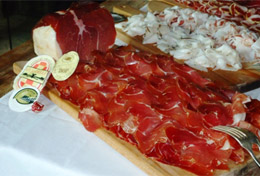 A well aged culatello should be hard to the touch and to prepare it the twine is first removed and then the ham is briefly rinsed. Next the skin is removed and the ham is wrapped in a wine soaked cloth for a few days before slicing it very thinly by hand.

Unlike its famous cousin Parma ham, culatello is not paired with sweet fruit or accompaniments. Purists believed it should at most be enjoyed on a slice of bread with butter to fully appreciate the ham’s silkiness, nuanced flavour and understated elegance.