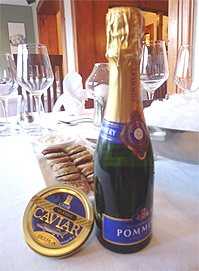 Caviar is one of the oldest surviving processed foods in the world. It was mentioned in writing as early as the third century BC, Batu Khan enjoyed it on candied apples during the Middle Ages, Pierre Belon described caviar as a drug in his 1588 travel notes, and in the 20th century it became synonymous with luxurious living. Today celebrities like Cameron Diaz proudly announce that ”when I go out, I love steak and caviar.”

Derived from the Persian word for egg, it is the non-ovulated eggs from sturgeon fish, treated with salt. Traditionally it is the roe from wild sturgeon that are killed in order to harvest the eggs. Three sturgeon species dominate and produce 90% of the world’s caviar; beluga, sevruga and the ‘golden caviar’ oscietra.

Illegal poaching and pollution are mainly to blame for dwindling numbers of sturgeon particularly in the Caspian and Black seas. Since 1997 CITES (Convention on International Trade in Endangered Species of Wild Flora and Fauna) regulated the international trade in sturgeon, even banning trade in certain sturgeon to try and save a specie that has been on earth since the dinosaurs.

It however remains one of the French kitchen’s greatest delicacies and thanks to new sustainable production methods we can still have Ellen Simon’s “Champagne wishes and caviar dreams!” 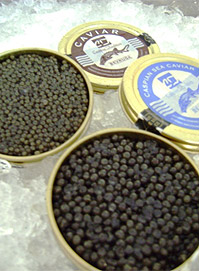 Sturgeon are now farmed extensively all over the world, and harvesting eggs through caesarean section is a new technique that makes it possible for the fish to produce eggs again and live a full life – for some species this is up to 170 years.

Caviar Classics is such an operation with a farm situated in Talesh, Iran, close enough to the Caspian Sea to use water from the sturgeon’s original habitat.  Iranian caviar has always enjoyed a reputation as being one of the best, and it is now available guilt-free in South Africa. Caviar Classic’s CITES approved Asetra, Imperial (best quality asetra), Beluga and Royal beluga (best quality beluga) are distributed locally.

Once the eggs are extracted from the sturgeon, Caviar Classics Miles Squarey  explains, they are washed and passed through a mesh sieve to separate the eggs and are then lightly salted (called malossol) with 3.2g salt/kg and 1g of borax added per kg to increase the shelf life. The better the quality egg the less salt is needed.

To assess the quality of caviar first check that there are no aromas of rotten egg and in appearance the eggs should be perfect little pearls, not broken and there shouldn’t be much liquid. Then pop it in your mouth and check that it is not too salty or sour.

Such delicacy needs ceremony to celebrate its delicate flavour. Remove the tin from the fridge 15 minutes before serving and place it on crushed ice, opening it just before serving. Bone or mother of pearl spoons should be used as metal affects the delicate nutty flavour of the eggs. The Russians prefer smoky buckwheat blinis, sour cream and vodka as accompaniments, while Western Europe enjoys it with toast points and Champagne. Whichever you choose a star ingredient like this does not need distracting sideshows – let it show off its faint taste of the sea.

Although caviar from farmed sturgeon is more affordable it remains a luxurious menu item reserved for celebrations. When one bears in mind that it can take beluga up to 20 years to reach maturity and produce eggs, it is no wonder that these little pearls are saved for high days and holidays, or in the words of James Beard: “The roe of Russian mother sturgeon has probably been present at more important international affairs than have all the Russian dignitaries of history combined. This seemingly simple article of diet has taken its place in the world along with pearls, sables, old silver and Cellinicups.”